Jesus Healed a Man Who Was Lame 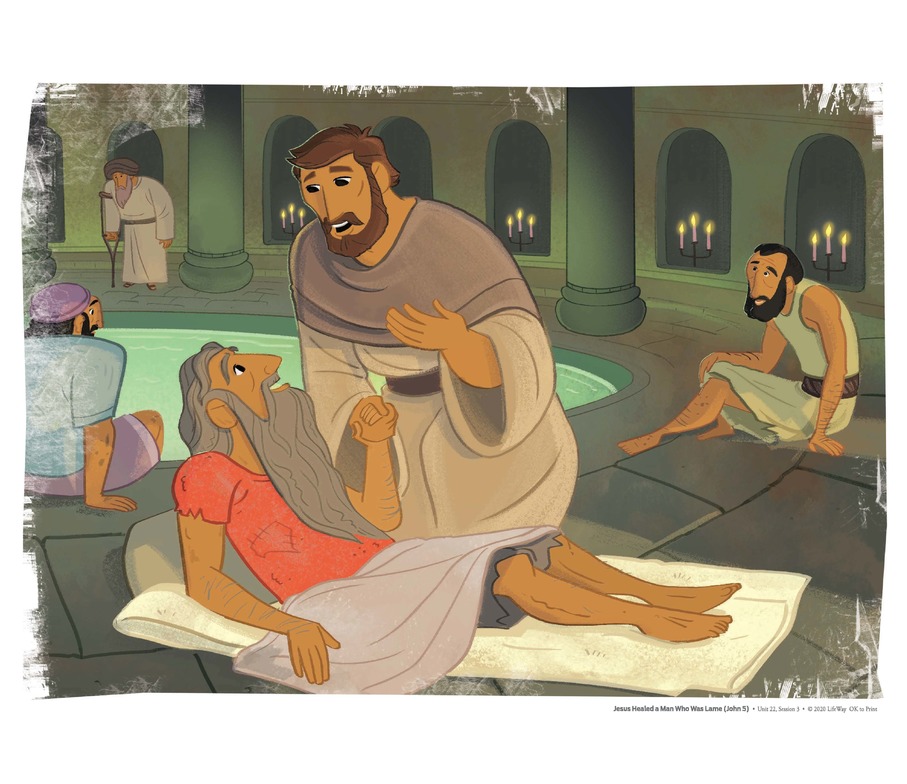 Located in the city of Jerusalem, the pool of Bethesda was a place many believed to possess healing powers. People who were sick or disabled went to the pool in hopes of being made whole. They believed an angel would stir up the waters, and the first person to get in would be healed. (Some translations include this detail in verse 4; but since the earliest and most accurate manuscripts do not include the detail, most contemporary translations omit it as well.)

Jesus sought out a man at the pool of Bethesda who had been disabled for 38 years. Jesus asked the man, “Do you want to get well?” The man, not recognizing who was talking to him (see John 5:13), explained his inability to get to the pool in time. Filled with compassion, Jesus commanded this man: “Get up, pick up your mat, and walk.” After decades of helplessness, the man was instantly healed. He picked up his mat and walked.

At this time, Jesus slipped away through the crowd. So when the Jewish leaders approached the man, asking questions about the healing and accusing the man of breaking the law by picking up his mat on the Sabbath, the man could not even identify who healed him. Yet Jesus sought out the man a second time. Jesus found the man in the temple and warned him, “Do not sin anymore, so that something worse doesn’t happen to you.”

Jesus cared about the man’s body; He had healed it. But Jesus also cared about the man’s soul. As you teach kids, emphasize that the man at the pool was unable to help himself. Jesus healed him, and he obeyed Jesus’ commands. In a similar way, we are unable to free ourselves from sin. Jesus calls us to trust in Him. When we trust in Jesus, He frees us from the power of sin and death so we can follow Him and obey Him.

Check out the age-appropriate Activity Page first to get your kids thinking, then watch the Bible story video and use the questions below to guage understanding.  Finish up by coloring the activity page or doing one of the other activities attached below.  Hope you have a great week!

1. Why was the man lying beside the pool?  Why couldn't he get in the water?

2. What did Jesus tell the man?

4. Why do you think Jesus healed the man on the Sabbath, even though he knew it was against the Jewish law?

5.  What does this tell you about Jesus and His heavenly Father?